Buzzwole Is Ready to Smack Down the Opposition in Pokémon UNITE 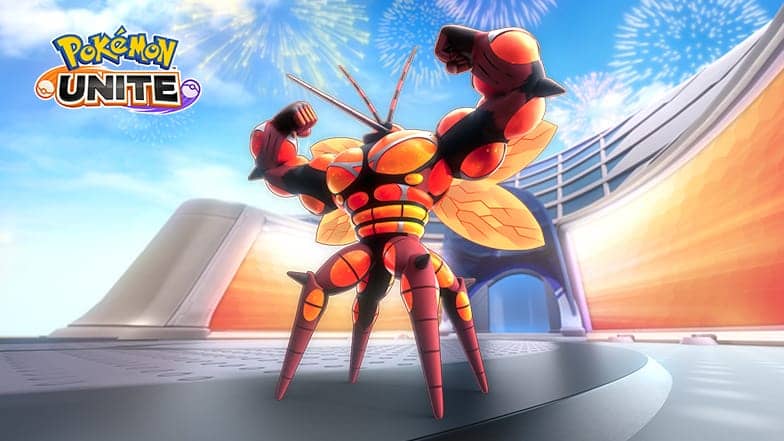 Flex on the competition with the Ultra Beast Buzzwole, now available to join your team in Pokémon UNITE. You can obtain Buzzwole for 12,000 Aeos coins or 575 Aeos gems at the Unite Battle Committee shop.

Read on to learn more about everything this Pokémon has to offer and pick up a few tips before charging into battle on Aeos Island.

This Melee All-Rounder is all the buzz and is ready to show off its strength with the power of its muscle gauge. Each time Buzzwole lands a basic attack on a Pokémon on the opposing team, the muscle gauge charges by one increment. Every third attack of Buzzwole’s also becomes a boosted attack, throwing two consecutive punches while restoring Buzzwole’s HP.

Buzzwole’s Ability, Beast Boost, increases Buzzwole’s movement speed and basic attack speed for a short time after Buzzwole knocks out or assists in knocking out a Pokémon on the opposing team. Beast Boost also charges the muscle gauge when Buzzwole lands basic attacks or certain moves on Pokémon on the opposing team. Conversely, when Buzzwole is not in combat, the muscle gauge depletes after a set amount of time.

Buzzwole moves in a designated direction before slamming the ground with a powerful punch. The shock from the punch deals damage to opposing Pokémon in the area of effect. If Mega Punch hits Pokémon from the opposing team, Buzzwole’s muscle gauge increases by one increment for each one that was hit.

Buzzwole grabs and restrains an opposing Pokémon in the designated direction, dealing damage over time while restoring Buzzwole’s HP. When Leech Life is used, it consumes Buzzwole’s entire muscle gauge. The number of hits and the amount of damage dealt per hit increase the more muscle gauge increments are consumed. Leech Life ends if Buzzwole becomes unable to act for any reason or if the restrained Pokémon escapes by using an Eject Button or through some other means.

Upgrade: Also causes each instance of damage dealt by Leech Life to be stronger than the last.

Upgrade: Resets the cooldown of Superpower when Buzzwole’s muscle gauge reaches its maximum.

Buzzwole lunges in the designated direction, dealing damage to opposing Pokémon and decreasing their Attack for a short time. If Lunge hits Pokémon from the opposing team, Buzzwole’s muscle gauge increases by one increment for each one that was hit. After Lunge is used, Buzzwole’s basic attack speed increases for a short time. A maximum of two uses can be kept in reserve for Lunge.

Upgrade: Widens the area of effect in which damage is dealt when the opposing Pokémon targeted by Smack Down hits the ground. Also, Buzzwole’s muscle gauge will now increase by two increments for each Pokémon on the opposing team that takes damage from Smack Down.

Buzzwole has one of the most hindrance-laden movesets in Pokémon UNITE, with Smack Down, Superpower, and Leech Life all being capable of inflicting hindrances during a match. As a Melee All-Rounder, Buzzwole is best suited for the central area, where it can gain Exp. Points and upgrade Mega Punch and Fell Stinger into these more-powerful moves without being bullied by Ranged Pokémon. Buzzwole’s Smack Down and Superpower combo is key to locking down opponents and swinging team fights in your team’s favor, but watch out if an opponent has a Full Heal—this battle item will break them out of your hindrances and ruin your combo.

Absol is one of the top damage-dealing Pokémon in Pokémon UNITE, but that doesn’t mean it’s unstoppable. Buzzwole’s Smack Down and Superpower are strong hindrance moves that not only stop Absol in its tracks but also deal massive amounts of damage with a full muscle gauge. Focus on using Smack Down and Superpower on Absol to protect your teammates from Absol’s powerful Night Slash and Psycho Cut combo.

Buzzwole has significant lockdown potential with its strong hindrance moves, but agile Ranged Pokémon like Cinderace are a difficult match for this bodacious Bug type. Smack Down and Superpower are powerful moves, but they can easily be avoided with the right amount of speed and distance. This is especially easy for Cinderace with its Blaze Kick and high ranged damage, so tread carefully.

Buzzwole is ready to smack down the competition. Lunge over to the Unite Battle Committee shop to get Buzzwole’s Unite license now.