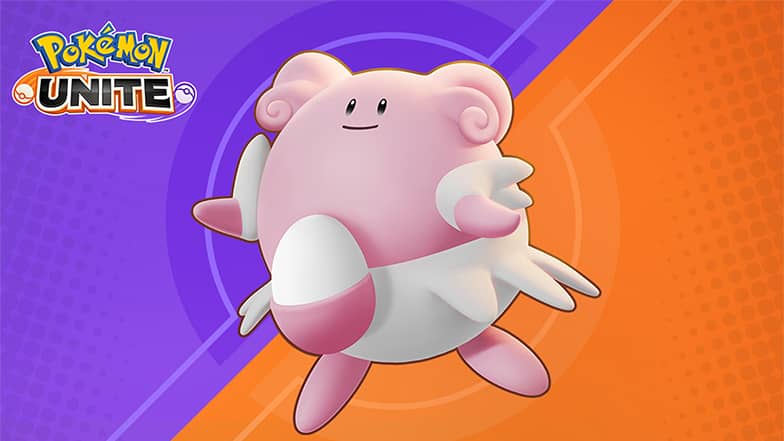 Hatch a plan to assist your teammates with this Pokémon’s wide range of healing and stat-boosting moves.

A new Pokémon is waiting to join your Pokémon UNITE team. Blissey is here as a Melee Supporter, and it should prove quite useful in battle thanks to its ability to heal your allies and boost their stats. This Pokémon will enter each battle as Chansey, but it will evolve into Blissey upon reaching Lv. 4. Although it may not be the best equipped for offense or scoring, it’s a powerhouse when it comes to supporting your team.

Many of Blissey’s moves are designed to help your teammates in some fashion. Heal Pulse will continually restore both Blissey’s HP and a designated ally’s HP for a short time.

Soft-Boiled lets you throw an egg to an ally, restoring the ally’s HP as well as Blissey’s. This move has a maximum of three uses that can be kept in reserve, but the move can eventually be upgraded to allow for more reserve uses.

Be on the lookout for Helping Hand, which greatly increases the movement speed and basic attack speed of Blissey and nearby ally Pokémon for a short time. Plus, while Helping Hand is in effect, all of Blissey’s basic attacks become boosted attacks.

Blissey is clearly great at supporting its teammates, but you can arm Blissey with the attack Egg Bomb to give it some offensive pop. Egg Bomb will hurl an egg at a designated location and then have the egg explode, dealing damage to opposing Pokémon in the area of effect and throwing them. The move’s upgrade also decreases the movement speed of opposing Pokémon for a short time when they’re thrown by the move.

Blissey’s Unite Move, Bliss Assistance, is learned at Lv. 8, and it allows Blissey to rush to its ally’s aid while protecting the ally from attacks. The move has the user dash to the designated ally Pokémon to give it an egg, which grants that Pokémon a shield and increases its Attack and Sp. Atk for a short time. Blissey also intercepts a portion of the damage received by that ally Pokémon for a short time. While dashing to help its ally, Blissey also throws nearby opposing Pokémon it comes in contact with.

When playing as Blissey, you probably don’t want to choose the same two moves each time you play. As a Supporter, Blissey is most useful when you take into consideration moves that will help your teammates and cancel out your opponents’ moves. This flexibility can be very rewarding to both you and your team if you take the time to master it.

If you want to egg on your teammates as this useful Supporter Pokémon, you can scramble on over to the Unite Battle Committee shop and get Blissey’s Unite license!