Tyranitar Shows Off Its Ancient Power in Pokémon UNITE 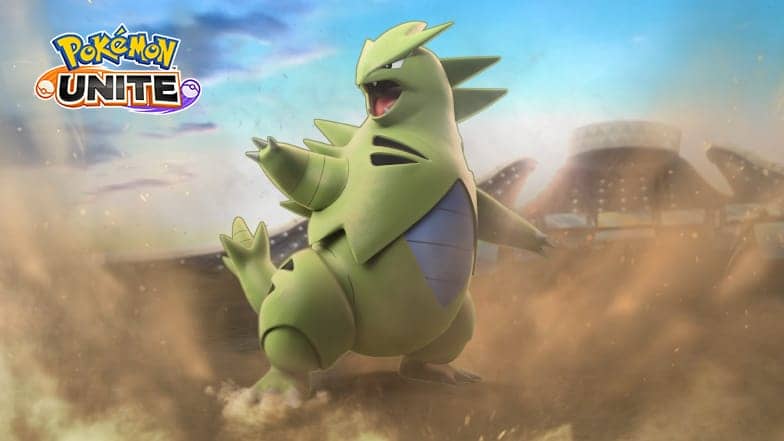 Go on a rampage with the Armor Pokémon Tyranitar, now available to join your team in Pokémon UNITE. This Melee All-Rounder may be tyrannical, but it will be an asset to any team. You can obtain Tyranitar for 14,000 Aeos coins or 575 Aeos gems at the Unite Battle Committee shop.

Read on to learn more about everything this Pokémon has to offer and pick up a few tips before rampaging on Aeos Island.

Tyranitar begins each match as Larvitar, but it will evolve into Pupitar at Lv. 5 and Tyranitar at Lv. 9. Larvitar starts with the Guts Ability. With Guts, when Larvitar receives a certain amount of damage, its Attack increases for a short time. This Ability goes on cooldown after it’s triggered.

When Larvitar evolves into Pupitar, its Ability becomes Shed Skin. With Shed Skin, when Pupitar receives a certain amount of damage, all of its status conditions are nullified and it is granted a shield. This Ability goes on cooldown after it’s triggered.

Once Pupitar evolves into Tyranitar, its Ability becomes Sand Stream, which summons a sandstorm around Tyranitar for a short time after it uses a move. This increases Tyranitar’s Defense and Sp. Def and deals damage to nearby opposing Pokémon.

Larvitar, Pupitar, and Tyranitar may have different Abilities, but their basic attacks are the same. Each Pokémon’s basic attack becomes a boosted attack every three attacks, dealing increased damage when it hits an opposing Pokémon.

Tyranitar explodes with anger and goes on a rampage, increasing its movement speed for a short time. If Tyranitar is affected by a hindrance, it will return to normal faster than usual. While Tyranitar is rampaging, its basic attack pattern changes and the attacks deal increased damage. If a Pokémon on the opposing team is hit by these basic attacks when its HP is below a set percentage, it is immediately knocked out.

Tyranitar is positioned to be one of the strongest Melee All-Rounders in Pokémon UNITE, with a moveset built to crush the competition. Ancient Power and Sand Tomb both make Tyranitar able to ignore the Defense and shield effects of all Pokémon, making this Pokémon especially powerful against bulky Defenders and Supporters. Combine these traits with its Unite Move, Tyrannical Rampage, and knocking out opposing Pokémon will be a cinch for Tyranitar if it can remain in the center of team fights.

Blissey is a Melee Supporter often at the center of Pokémon UNITE team compositions, offering powerful shield effects to its allies through Safeguard and its Unite Move, Bliss Assistance. Blissey is a difficult egg to crack, but thanks to Ancient Power and Sand Tomb allowing Tyranitar to ignore the Defense and shield effects of all Pokémon, Tyranitar has no problem breaking its defenses.

Tyranitar is an overwhelming force in melee range, but Pokémon with powerful ranged capabilities and decent mobility are a strong counter to this towering tyrant. Dragonite, for example, is a Ranged All-Rounder that can use its Dragon Dance to skirt around Tyranitar and keep its distance. Combine that with Dragonite’s Hyper Beam, a ranged move that deals significant damage, and Dragonite presents a tough challenge for the Armor Pokémon.