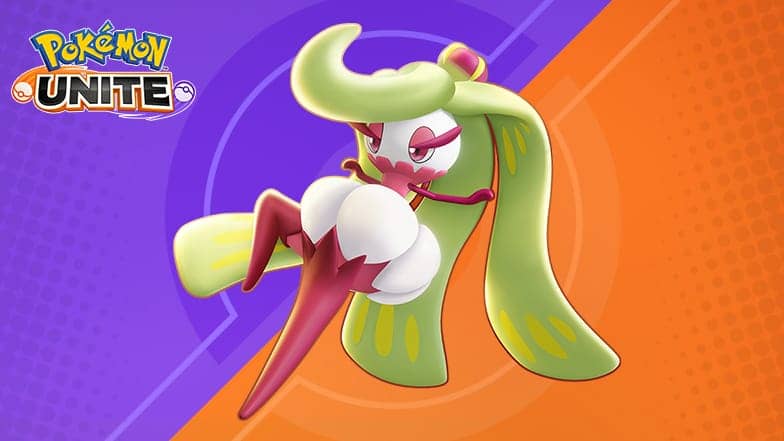 Add a Melee All-Rounder to your team with an agile Pokémon that’s ready to rule over the opposition.

Kick off the competition in Pokémon UNITE with Tsareena, now available to join your team. This Pokémon is a Melee All-Rounder, and it’s ready to glide, kick, and stomp its way to victory. Tsareena begins each match as Bounsweet, but it will evolve into Steenee at Lv. 4 and Tsareena at Lv. 6.

Tsareena’s basic attack becomes a boosted attack with every third attack, lunging at an opposing Pokémon, dealing damage, and lowering its Defense for a short time. Bounsweet and Steenee start out with the Ability Oblivious, which reduces the duration of hindrances that affect them. When Steenee evolves into Tsareena, Oblivious becomes Queenly Majesty, which also reduces the duration of hindrances that affect it. Furthermore, after Tsareena uses any combination of three boosted attacks or moves, the fourth boosted attack or move it uses will apply the Queenly Majesty buff effect to Tsareena, which grants an additional effect to the next move it uses.

At Lv. 1 and Lv. 3, Bounsweet can learn Razor Leaf and Rapid Spin.

At Lv. 5, Razor Leaf can be upgraded into one of two moves: Triple Axel or Stomp.

Triple Axel has Steenee spin-kick three times in a designated direction, dealing damage to opposing Pokémon. This damage increases each time Steenee lands a kick, and Steenee’s basic attack speed is increased for a short time after the move ends. The duration of this attack speed increase corresponds with the number of kicks that landed. When Tsareena uses Triple Axel while under the Queenly Majesty buff effect, Tsareena restores HP each time a kick lands.

At Lv. 6, Steenee evolves into Tsareena, and Rapid Spin can be upgraded into either Trop Kick or Grassy Glide.

Trop Kick has Tsareena perform a flying kick in a designated direction, dealing damage to opposing Pokémon it hits and decreasing their Attack for a short time. Opposing Pokémon caught in the wake of the attack will also receive damage and have their movement speed decreased for a short time. When Tsareena uses Trop Kick while under the Queenly Majesty buff effect, Tsareena is also granted a shield.

Show the opposition who’s in charge with Tsareena’s Unite Move, Queen Ascendent, which it learns at Lv. 9. This attack sends Tsareena leaping toward an opposing Pokémon and kicking it high into the air before showering it with a flurry of kicks while airborne. When Tsareena lands on the ground at the conclusion of this epic attack, it recovers HP.

Tsareena is ready to reign over the competition. Glide over to the United Battle Committee shop to get Tsareena’s Unite license now.