Triple Trample the Competition with Dodrio in Pokémon UNITE 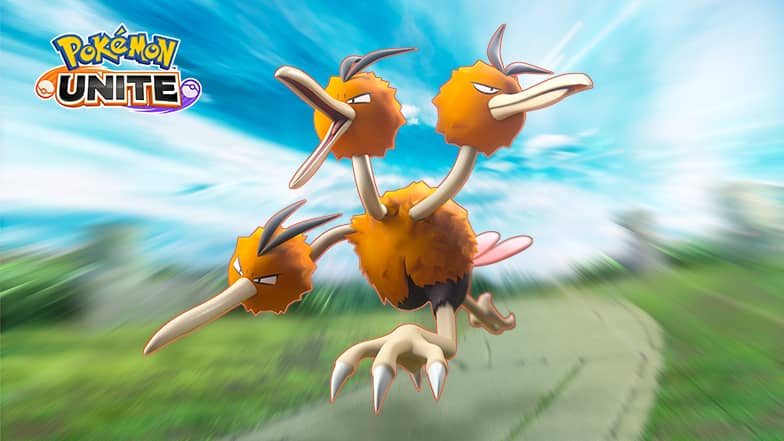 Dodrio is sprinting over to Aeos Island and getting ready to join your team in Pokémon UNITE. With powerful beak attacks and a unique scoring Ability, this Speedster proves that three heads are better than one. You can obtain Dodrio for 14,000 Aeos coins or 575 Aeos gems at the Unite Battle Committee shop.

Read on to learn more about everything this Pokémon has to offer and to pick up a few tips before sprinting into battle on Aeos Island.

Dodrio begins each match as Doduo, but it will evolve into Dodrio at Lv. 5. The Pokémon’s basic attack becomes a boosted attack with every third attack, dealing consecutive blows with each of the Pokémon’s heads. When the Pokémon’s sprint gauge is full, its basic attacks will have it charge in the direction it’s facing and consume all of the sprint gauge. If this charging attack hits opposing Pokémon, all of the user’s move cooldowns are reduced.

Doduo dashes forward, increasing its movement speed for a short time and dealing damage to opposing Pokémon it hits. Quick Attack’s cooldown is reduced if it hits opposing Pokémon.

Dodrio attacks with its beak in a cone in front of itself, dealing damage to opposing Pokémon and applying one of the following random effects: a decrease to Attack and damage over time for a set amount of time, a decrease to basic attack speed, or a decrease to movement speed. When Dodrio’s sprint gauge is full, Dodrio instead shoots out three projectiles—one red, one yellow, and one blue—in the designated direction. If a projectile hits an opposing Pokémon, the projectile deals damage and applies one of the aforementioned effects based on its color. After Tri Attack is used, Dodrio’s next basic attack deals additional damage and restores some of Dodrio’s HP. A maximum of two uses can be kept in reserve for Tri Attack. When Tri Attack is upgraded, Dodrio’s next basic attack after using Tri Attack restores more HP. When Dodrio’s sprint gauge is full, Tri Attack’s cooldown is reduced.

Dodrio runs to a designated location. While running, Dodrio is immune to hindrances. If Dodrio makes contact with opposing Pokémon while running, it deals damage to them and throws them into the air. When Dodrio arrives at the designated location, its Attack increases for a short time, and it is granted a shield. Dodrio’s sprint gauge also charges faster for a short time.

Dodrio is the first Speedster coming to Pokémon UNITE since Absol, Gengar, Talonflame, and Zeraora debuted with the game’s launch, and it offers a unique playstyle. Between Drill Peck, Agility, Jump Kick, and its Unite Move—Triple Trample—Dodrio has plenty of tools to get in and out of fights with ease while sowing some mayhem along the way. Drill Peck in particular can disrupt opponents by shoving them away from or into your teammates to secure key knockouts—making Dodrio especially unique as a Speedster that offers defensive disruption.

Decidueye excels at raining damage down from a distance with its powerful Spirit Shackle but is famously known to struggle against Pokémon that can run it down. Dodrio’s Triple Trample and Jump Kick are both excellent moves that help it close distance, allowing it to finish off Decidueye with Drill Peck. Regardless of whether Dodrio gets the knockout, forcing Decidueye to reposition is a win for Dodrio and its teammates.

Dodrio can run circles around most Pokémon on Aeos Island, but Snorlax’s Block stops the Triple Bird Pokémon in its tracks. Whether Snorlax uses Block to protect its allies or to shuffle Dodrio toward its own team, it will be tough for Dodrio to respond without the freedom of its legs. Snorlax’s Heavy Slam adds to the pressure from Block, potentially throwing Dodrio into the air for a whole second afterward.