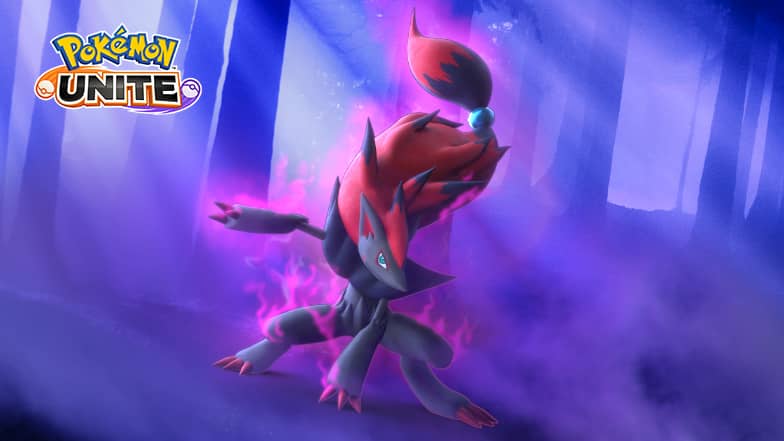 Trick your opponents and treat them to mayhem with Zoroark in Pokémon UNITE! This Melee Speedster from the Unova region is ready to surprise the competition and take over Aeos Island. You can obtain Zoroark for 14,000 Aeos coins or 575 Aeos gems at the Unite Battle Committee shop. Zoroark will only be obtainable with Aeos gems as part of a Holowear bundle (for 1,625 gems) for the first seven days of its release.

Read on to learn more about everything Zoroark has to offer and to pick up a few tips before battling on Aeos Island.

Zoroark begins each match as Zorua, but it evolves into Zoroark at Lv. 5. Both Zorua and Zoroark’s basic attack becomes a boosted attack with every third attack, dealing increased damage. Zorua and Zoroark also share the Ability Illusion. When either Pokémon uses this Ability, the Pokémon takes the form of a random wild Pokémon or Pokémon from the opposing team. The Pokémon returns to its original form when it takes damage or uses a basic attack or move. Surprise your opponents with some classic disguise trickery!

The user dashes in the designated direction, dealing damage to opposing Pokémon.

Zoroark dashes in the designated direction, dealing damage to opposing Pokémon and restoring its own HP. Cut can be upgraded to increase the amount of HP it restores.

Zoroark joins a steadily growing class of powerful Speedsters in Pokémon UNITE, and it may even be the most mobile of them all. Night Slash and Feint Attack both provide numerous opportunities for Zoroark to zip around during battle, changing targets and dealing damage in ways similar to both Lucario and Tsareena. Shadow Claw and Cut don’t provide as much mobility, but they’re crucial for getting the most out of Night Slash or Feint Attack, as they extend Zoroark’s ability to combine moves and deal damage. Keep their cooldowns in mind as you chase down targets.

Espeon is a powerful Ranged Attacker that benefits from evolving early in battle, at Lv. 4—just like fellow Eevee Evolutions Sylveon and Glaceon. Espeon can do plenty of damage from a distance, but once a Pokémon gets close to Espeon, Espeon can have trouble keeping it away without the strength of Stored Power or Psybeam, which are weak up close. With Night Slash and Feint Attack as strong gap-closing options—and with Espeon having relatively low HP—Zoroark has little issue knocking Espeon out.

Clefable’s Gravity negates most of Zoroark’s mobility and makes it difficult for just about any Speedster to pursue enemy Pokémon. If Clefable times Gravity to interrupt Zoroark’s Night Slash or Feint Attack, it can even leave Zoroark unable to act for a short time. As Zoroark, it’s best to avoid Clefable in team fights—or wait out its key cooldowns before launching your attack.