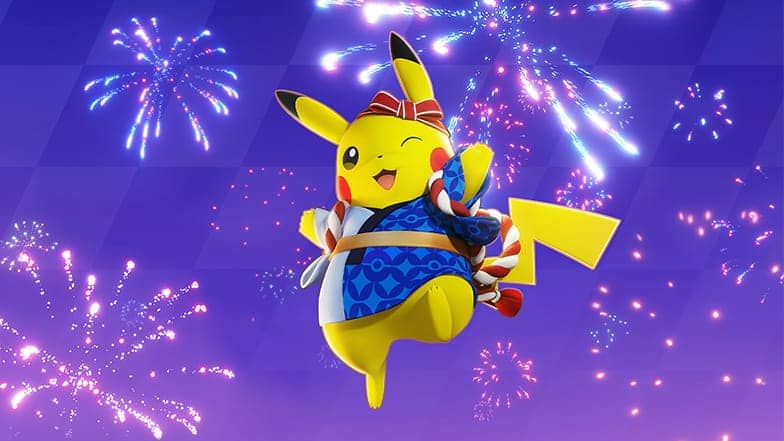 Get ready to jump into exciting Pokémon team battles, as Pokémon UNITE, which was previously released for Nintendo Switch™, is now available for iOS and Android devices. To coincide with the mobile release of the game, a new battle pass dubbed “Galactic Ghost 094” has begun.

Because over five million Trainers preregistered for the mobile version of Pokémon UNITE before its release, every user who has played the mobile version by Sunday, October 31, 2021, at 7:59 a.m. PDT will receive the Unite license for Pikachu (which lets you play as the popular Pokémon) along with the special Festival Style: Pikachu Holowear. Not only that, but every Trainer will also receive 1,000 Aeos tickets, which can be exchanged for in-game items. If you already have the Unite license for Pikachu, you will receive Aeos coins instead.

A new feature called Unite squads has been added to Pokémon UNITE as well. Unite squads connect you with other players by allowing you to create your own squad or search for already existing squads to join. By using squad tags, you can form or join a squad of like-minded Trainers. Do you want a team that aims to be the best by pushing each other to succeed? Or perhaps you would prefer a squad in which you can relax and have fun together. Use or search for squad tags that fit your playstyle, and you’re bound to find the perfect teammates.

When Pokémon UNITE launched on Nintendo Switch, players could receive the Unite license for Zeraora as a launch bonus. However, mobile players can still earn the ability to play as this Mythical Pokémon (as well as a few other rewards) by completing a special mission. Accomplishing this mission simply requires winning a certain number of battles. Here’s what you can earn:

If you already have the Unite license for Zeraora, you will receive Aeos coins instead.

With this release, Pokémon UNITE for both mobile and Nintendo Switch now supports French, Italian, German, and Spanish languages in addition to English. We hope you have fun playing Pokémon UNITE on your mobile devices. Be sure to check out our Minute-by-Minute Guide to Pokémon UNITE Battles as well as our detailed look at the game’s held items for valuable tips and strategies to improve your skills!