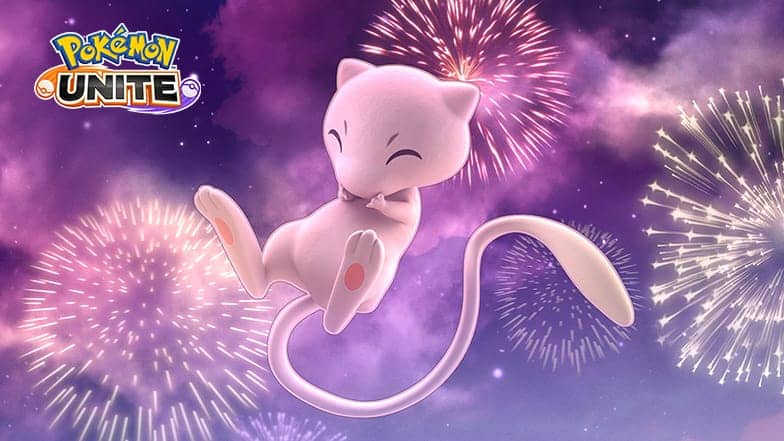 Mew’s Ability, Synchronize, increases the movement speed of both Mew and nearby ally Pokémon for a short time each time Mew uses a move. When Mew reaches Lv. 5, the Move Reset icon can be used to reset Mew’s moves and learn new ones. This icon goes on cooldown after it is used. Each time Mew knocks out or makes an assist on a Pokémon on the opposing team or scores a goal, the cooldown of Move Reset is reduced. Using Move Reset reduces the cooldown of Mew’s Unite Move.

Mew hurls an electric orb, dealing damage to opposing Pokémon in the area of effect and leaving them paralyzed for a short time. Electro Ball deals more damage the lower the opposing Pokémon’s remaining HP is.

Electro Ball can be upgraded to strengthen the effect of the paralysis it inflicts.

Mew blasts a bundled beam of light, dealing damage to opposing Pokémon in the area of effect. If Solar Beam hits any opposing Pokémon, Mew gains one additional boost counter.

Solar Beam can be upgraded to reduce its cooldown by one second for each opposing Pokémon it hits.

Surf can be upgraded to strengthen the effect of the shield granted while using it.

Mew creates a translucent wall at the designated location. Opposing Pokémon cannot pass through the wall and will be shoved if they make contact with it. If Mew’s Electro Ball, Solar Beam, or Surf move passes through the wall, the effects of the move (such as damage, range, and area of effect) will be boosted. If Light Screen is used again, it pulls the wall closer and has it move with Mew. While the wall moves with Mew, attacks from opposing Pokémon that pass through it will deal reduced damage.

Light Screen can be upgraded to increase the size of the wall.

Mew moves quickly in a designated direction, increasing its movement speed for a short time. A maximum of two uses can be kept in reserve for Agility.

Agility can be upgraded to increase the distance that Mew moves in the designated direction.

Mew can reset all of its moves and learn new ones. Move Reset’s cooldown is reduced when Mew knocks out or makes an assist on Pokémon on the opposing team or when Mew scores a goal.

Mew is a powerful Ranged Attacker with the unique flexibility of having both powerful offense-focused and powerful support-focused moves. Whether Mew is using Electro Ball or Solar Beam, either move can do enough damage to knock out enemy Pokémon—and when either of these moves is paired with Light Screen or Agility, Mew can chase down just about any Pokémon in the game. Meanwhile, Coaching allows Mew to directly raise allies’ power, making it a powerful support Pokémon in addition to a strong Attacker.

Tyranitar is one of the strongest All-Rounders in Pokémon UNITE, with decent mobility and high damage, but Mew has plenty of tools for dancing around it. Mew’s Electro Ball and Solar Beam both deal significant damage to Tyranitar from a safe distance. Mew’s Light Screen and Agility are also key in maintaining space between the two Pokémon, allowing Mew to deal damage safely. Plenty of Pokémon have a range advantage over Tyranitar, but Mew has that extra bit of mobility and utility that makes it suitable for countering the tyrant of Aeos Island.

Mew is strong and mobile, but it can easily be taken out of a fight by Pokémon that can quickly deal high amounts of damage. Absol’s Night Slash and Psycho Cut combo is exceptional at cutting any Attacker down to size—and Mew is no exception. Absol doesn’t lock Mew out of making an impact on the game, but it does put significant pressure on Mew to maintain safe positioning.