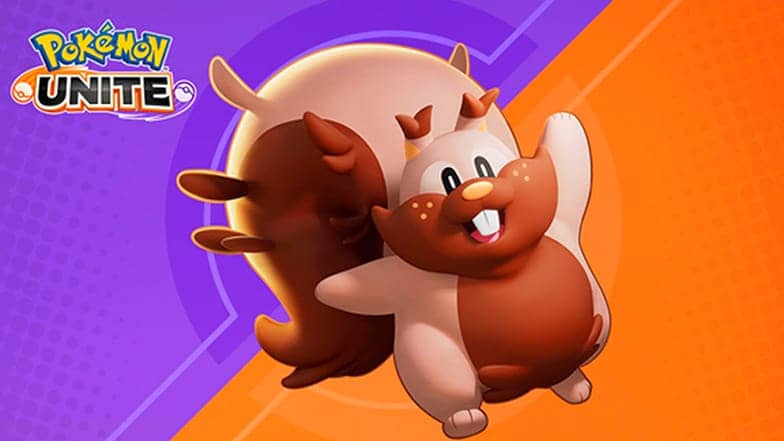 Prepare to stash, eat, and wield Berries in Pokémon UNITE, as Greedent is now available to join your team. This Berry-consuming Pokémon is a Melee Defender, and it’s ready to unleash its unorthodox attacks against your opponents in battle. This Pokémon begins each match as Skwovet, which will evolve into Greedent at Lv. 5.

An essential feature of Greedent’s gameplay and attacks is that it stashes Berries in its tail, later utilizing these Berries to help power attacks and restore HP. Each of Greedent’s moves involves consuming, dropping, or stashing Berries.

Greedent’s basic attack becomes a boosted attack with every third attack, dealing increased damage when it hits and causing one Berry to drop from Greedent’s tail. Greedent’s Ability, Cheek Pouch, allows it to recover HP by eating a Berry, in addition to gaining the usual effects of the Berry. At the same time, Greedent stealthily stashes another Berry in its tail. Whenever Greedent is hit, whether by a single attack or a combination of attacks, it will drop a Berry from its tail.

At Lv. 1 and Lv. 3, Skwovet can learn Tackle and Defense Curl.

Tackle has Skwovet leap to a designated area, dealing damage to opposing Pokémon in the area of effect and decreasing their movement speed for a short time. If Skwovet has any Berries hidden in its tail, it will consume all of them. The more Berries it consumes, the more Tackle’s cooldown period is reduced.

Defense Curl grants Skwovet a shield for a short time and also drops a Berry in front of Skwovet.

When Skwovet reaches Lv. 5 and evolves into Greedent, Defense Curl can be upgraded into one of two moves: Stuff Cheeks or Covet.

Stuff Cheeks has Greedent drop several Berries, which it can then eat to recover HP. If Greedent’s recovered HP exceeds its maximum HP, that extra HP will be converted into a shield effect. If Greedent catches sight of a Berry while using this move, its movement speed is increased for a short time. Stuff Cheeks can be upgraded to increase the number of Berries Greedent drops from its tail.

Covet has Greedent run with all its might, dealing damage to opposing Pokémon it hits and throwing them. While running, Greedent drops Berries from its tail. If Greedent eats a dropped Berry, its movement speed is increased for a short time. The more Berries Greedent eats, the faster it will move. Additionally, the move Belch or Bullet Seed can also be used while running. Greedent can also utilize the move Tackle while Covet is active, slightly changing the attack so that Greedent does not leap to a designated area. Instead, while Greedent is running, Tackle deals damage to opposing Pokémon in front of it. Covet can be upgraded to increase the damage it deals and increase the frequency at which Greedent drops Berries.

At Lv. 7, Tackle can be upgraded into one of two moves: Bullet Seed or Belch.

Bullet Seed has Greedent spit Berry seeds in a designated direction. This deals damage to opposing Pokémon in the area of effect and decreases their movement speed for a short time. The more Berries Greedent has stashed away, the more damage this move deals. Bullet Seed can be upgraded to increase the damage it deals.

Belch deals damage to opposing Pokémon in the area of effect and decreases their movement speed for a short time. If Greedent has any Berries stashed in its tail when using this move, it consumes all of them. The more Berries Greedent consumes, the more this move’s cooldown period is reduced. Belch can be upgraded to increase the damage it deals.

To truly throw the opposition, make use of Greedent’s Unite Move, Berry Belly Flop, which it learns at Lv. 9. This area attack kicks off with Greedent eating a Berry to recover HP. Greedent then leaps to the designated area, dealing damage to opposing Pokémon in the area of effect and throwing them. Greedent then eats a special Berry, which allows it to stash an unlimited number of Berries in its tail for a short time and also resets the cooldowns of its other moves.

Greedent is ready to be a berry useful Defender to your team. Belly flop on over to the Unite Battle Committee shop to get Greedent’s Unite license now.