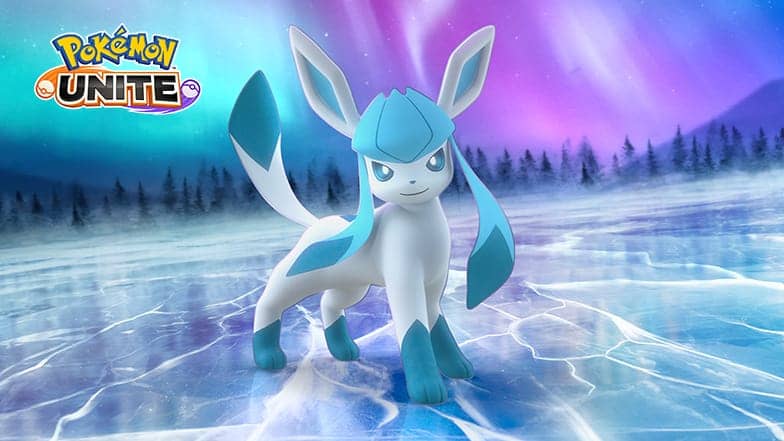 This Ranged Attacker combines graceful mobility and a storm of icy attacks to snow in the opposition. The Pokémon’s basic attack becomes a boosted attack with every third attack, dealing increased damage and generating two ice crystals when the boosted attack hits an opposing Pokémon (up to eight crystals can be held). The Pokémon starts out each match as Eevee and evolves into Glaceon at Lv. 4. Glaceon’s Ability, Snow Cloak, negates any hindrance that would affect it and makes Glaceon start sneaking and become invincible for a short time before the Ability goes on cooldown.

Swift generates four stars around Eevee, and then each time Eevee hits an opposing Pokémon with a basic attack, one of the stars (or two stars, in the case of a boosted attack) will shoot out and deal additional damage to that Pokémon.

When using Tail Whip, Eevee wags its tail at an opposing Pokémon, dealing damage and decreasing that Pokémon’s Defense, Sp. Def, and movement speed for a short time. Eevee’s next basic attack after using Tail Whip will also become a boosted attack.

When Eevee reaches Lv. 4 and evolves into Glaceon, Swift can be upgraded into one of two moves: Icicle Spear or Icy Wind.

At Lv. 6, Tail Whip can be upgraded into either Ice Shard or Freeze-Dry.

After reaching Lv. 8, Glaceon is ready to put on a show with its Unite Move, Glacial Stage. Glaceon leaps into the air, creating a diamond-shaped ice zone that deals damage to opposing Pokémon in the area of effect. While Glaceon is in the ice zone, its movement speed is increased, and it gains an ice crystal whenever a set amount of time passes. The ice zone also decreases the movement speed of all opposing Pokémon.

Get ready to start a snowdown with Glaceon in Pokémon UNITE. Head over to the Unite Battle Committee to get Glaceon’s Unite license now.