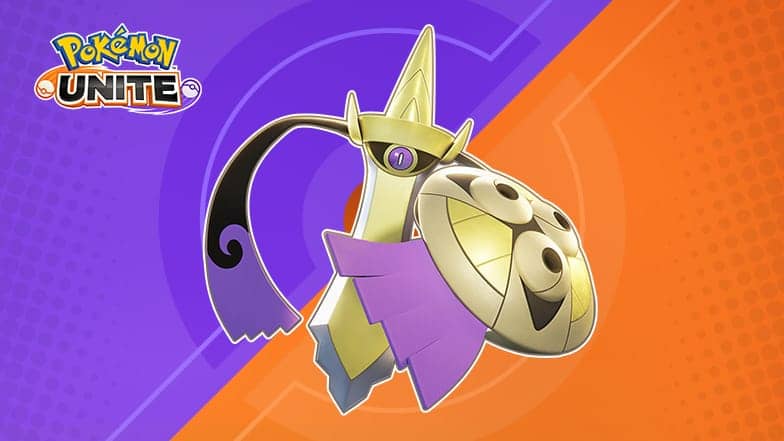 Take up arms and charge into battle with Aegislash, now available to join your team in Pokémon UNITE. This Pokémon is a Melee All-Rounder that can gracefully pivot between offensive and defensive stances to lead your team to victory. Aegislash begins each match as Honedge, but it will evolve into Doublade at Lv. 5 and Aegislash at Lv. 7.

Honedge and Doublade start out with the Ability No Guard, which increases both the damage they receive and the damage they dish out, making it a bold, strategic choice in battle. When Doublade evolves into Aegislash, No Guard becomes Stance Change, which allows Aegislash to switch between its Blade Forme and Shield Forme. When Aegislash uses a blade move, it changes its form to Blade Forme, increasing its movement speed, Attack, and basic attack speed. When Aegislash uses a shield move, it changes its form to Shield Forme, increasing its Defense and Sp. Def. On top of that, after Aegislash switches from Shield Forme to Blade Forme, Aegislash’s movement speed and basic attack speed are further increased for a short time.

At Lv. 1 and Lv. 2, Honedge can learn Shadow Sneak and Iron Defense. Shadow Sneak casts a shadow in a designated direction, dealing damage to opposing Pokémon caught in its murky path. After the shadow hits an opposing Pokémon or travels its maximum distance, Honedge warps to the shadow’s location, dealing damage to nearby opposing Pokémon and increasing its boost count. Meanwhile, Iron Defense envelops Honedge in a powerful protective force for a brief time. The protection disappears after blocking one attack and increases Honedge’s boost count by one at the same time.

Shadow Sneak’s second upgrade is the equally terrifying Shadow Claw. This attack has Doublade slash twice in a designated direction, dealing damage to any opposing Pokémon it hits. Doublade then delivers a final, rising slash that deals damage and throws any opposing Pokémon it hits. Doublade’s boost count increases by one if at least one of the three slashes hits. Shadow Claw can be upgraded to increase the critical-hit rate of the Doublade’s basic attacks, boosted attacks, and moves (except its Unite Move) for a short time after the final slash hits.

Iron Defense’s second upgrade, Iron Head, sends Aegislash barreling boldly in a designated direction, dealing damage to opposing Pokémon it hits along the way. This increases Aegislash’s boost count by one, and Aegislash protects itself with a special shield for a short time afterward. This shield does not protect Aegislash from hindrances, but it can nullify damage. When the shield blocks an attack, it disappears and Aegislash’s boost count is increased by one. When upgraded, this move also increases Aegislash’s attack for a short time after the special shield blocks an attack.

Aegislash goes for the knockout with its Unite Move, the fittingly named Coup de Grace. Leveraging all its power as a warrior, Aegislash unleashes a ground-splitting slash in a designated direction, dealing damage to opposing Pokémon and dealing even greater damage to opponents with low remaining HP. Furthermore, if Coup de Grace does, in fact, deliver a coup de grace by knocking out an opposing Pokémon, Aegislash’s boost count increases.

Aegislash is unsheathed and ready to cut down the competition. Charge over to the Unite Battle Committee shop to get Aegislash’s Unite license now.