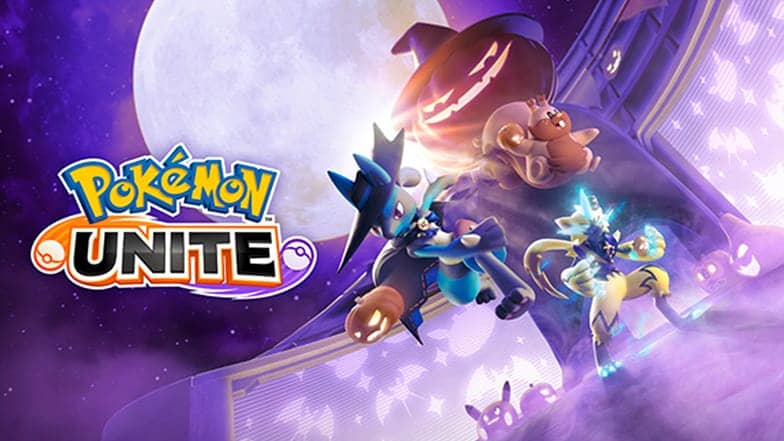 You’ll find pumpkins aplenty in Pokémon UNITE with the arrival of Aeos Island’s Halloween celebration. From October 20, 2021, to November 10, 2021, the game will feature all sorts of tricks and treats, including a fun new take on Mer Stadium battles, special bonuses that earn you pumpkins, and festive new ways to deck out your Trainer and your Pokémon. And don’t be surprised if the game looks a little spookier than usual, too!

You’ll certainly notice a big change when you play a quick battle in Mer Stadium. Now during a match, the battle item button controls your Pumpkin Toss. Tap this button, and you’ll lob a pumpkin that covers the opposing Pokémon for a short time. Just be aware that you can hit your teammates as well, and they can do the same to you, so be ready to dodge incoming produce!

While a Pokémon is covered with a pumpkin, it’s unable to score points and it moves by rolling, which increases its speed. Although pumpkined Pokémon can’t use their normal moves, they do have access to a special move called Pumpkin Push. This rolling dash can be used to smack into opposing Pokémon and push them aside, as well as flee from trouble.

If that doesn’t get you pumped, participating in Mer Stadium’s festive battles can also earn you collectible pumpkins that can be exchanged for limited-time Halloween items. Mer Stadium will be decked out for Halloween only until November 10, so play as many matches as you can before then.

There are also other ways to earn pumpkins. From October 20 to November 7, there’ll be daily log-in bonuses, and from October 24 to November 2, you’ll be able to complete daily missions to collect even more. These pumpkins can be used in the Pumpkin Exchange to get items such as Battle Point boost cards, a Greedent Unite license, a Halloween background, a Halloween hat, and more.

The Pumpkin Exchange and Halloween shop items will be around only until November 10, so don’t wait to scare up some style.

There’s certainly a lot of to do in Pokémon UNITE this Halloween season, so go grab those gourds!